Actor and Wilkesboro, North Carolina native Zach Galifianakis stars in a new documentary, Democracy For Sale, which discusses how his home state went from being “a beacon of light and generosity in a sea of red state reactionary politics” to what the film’s website refers to as “one of the most regressive and intentionally belligerent states in the union.”

The documentary is currently being screened for free across North Carolina, continuing through February, with more screenings are still being scheduled.

Galifianakis, who was born in Wilkesboro and attended N.C. State University, may be best known for his role in the Hangover trilogy of films. He owns a farm in northeastern Alleghany County and splits his time between the farm and his work.

The documentary takes on the story of North Carolina’s transformed politics, including new and growing political spending, or as the film’s website says, “how the money of a few has come to dominate our democracy.”

Galifianakis investigates allegations that the North Carolina government was “put in power by moneyed interests and has thus carried out a program that only benefits its backers: cuts to education, health care spending and environmental protection; lowering of taxes for the wealthy and corporations; and the passage of laws designed to roll back access to the ballot.”

Democracy For Sale is part of the America Divided docu-series produced by Common, Norman Lear, and Shonda Rhimes. It is a five-part series featuring narratives of inequality in education, housing, health care, labor, criminal justice, and the political system.

Galifianakis is joined by other stars, including Rosario Dawson, America Ferrera, Amy Poehler, Peter Sarsgaard, and Jesse Williams, who each serve as correspondents in other documentaries in the series.

Working Films, the company heading up the series, is working with Appalachian Voices, Democracy NC, the N.C. NAACP, and other North Carolina organizations to set up the screenings.

Anyone who is interested can request free screenings of the series online here.

You can watch a clip from Democracy For Sale below, as well as the official trailer for the America Divided series! 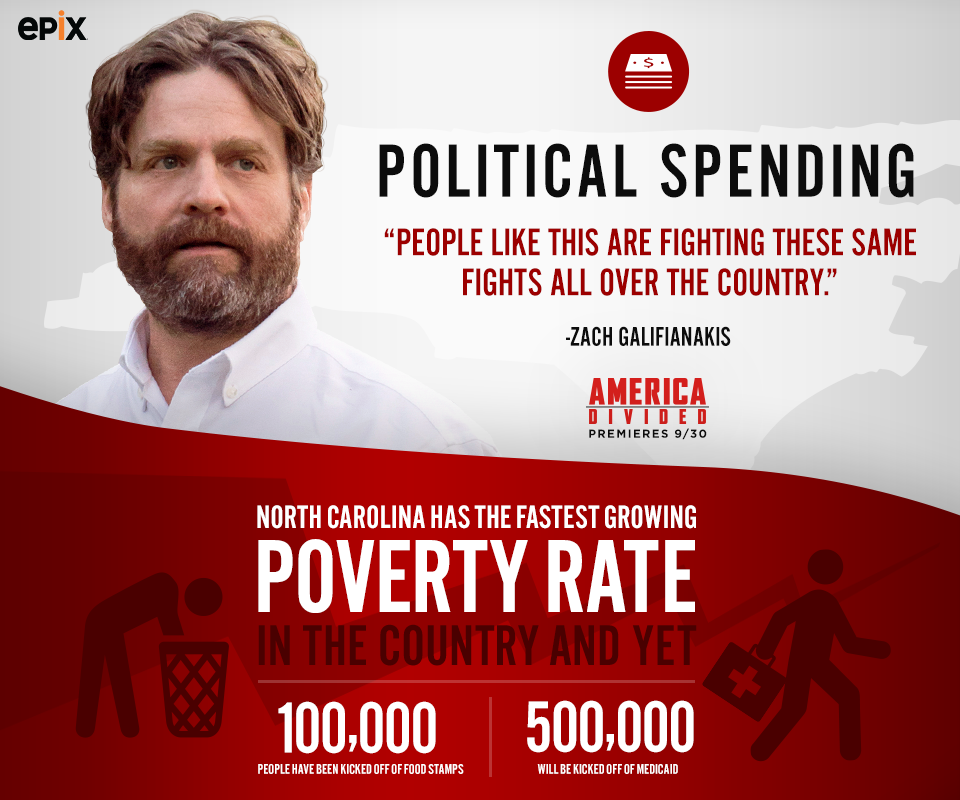