We were hesitant to publish this today for fear it may get lost amid the many fake April Fools Day stories, but this is no joke and it’s too serious to wait, as the much anticipated study by NC State University regarding the real impact of North Carolina’s film incentive program was released today, finding that allowing the incentives to expire at the end of this year could cost the state approximately 4,000 jobs. 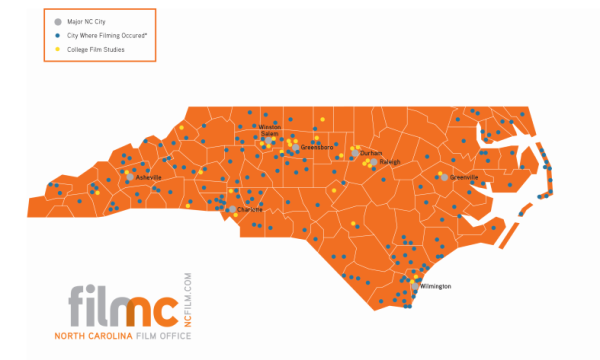 The study also finds that for every dollar of the film incentive credit that the state issues, the film industry in turn spends $9.11 within North Carolina, providing a significant return on investment.

You can read the full press release from the North Carolina Production Alliance below, and then click here to read the complete study, and be sure to sound off in the comments!

Beginning in 2007, when the incentive was first enacted, through 2012, the film and television industry has spent $1.02 billion in the state, and generated a projected $170,000,000 in tax revenue. The cost of the credit over the same time period was $112,000,000. The result means that for every dollar of credit issued, the industry generated $9.11 in direct spending and contributed $1.52 in tax revenue back to North Carolina.

The study, titled “A Supply Chain Study of the Economic Impact of the North Carolina Motion Picture & Television Industry,” aims to quantify the incentive’s return on investment (ROI) and using predictive models, determine what the financial impact will be both if the incentive is extended, and if the incentive is allowed to expire.

“The objective of this study was to present a clear picture of the film and television production incentive, how it impacts North Carolina’s economy, and how without it, the landscape for the industry might be drastically different,” said the study’s author Dr. Handfield. “The findings are quite clear on these matters, and reveal the incentive to be the driving force behind the economic success of North Carolina’s film and television industry.”

Below are highlights of the study’s key findings:

The predictive model shows a significant benefit to the State associated with extending the production incentive. Empirical survey results and cost model projections suggest the industry would grow to a projected $587M, which would begin to rival the size of the industry in Georgia ($880M). The extension would also result in a projected work force of nearly 31,000, nearly 6,400 of which would be full-time production jobs.